No products in the basket.

What Size Bed Should You Choose?

Firstly, the length. It is advisable to buy one that is at least 10cm longer than the tallest person. The last thing you want is for your feet to be dangling over the end of the mattress or having to curl your legs up.

If you’re a particularly tall person, some bed manufacturers make products that are 215cm (7ft 0”) in length. Alternatively, you could choose to purchase a ‘bed extender’ type product. 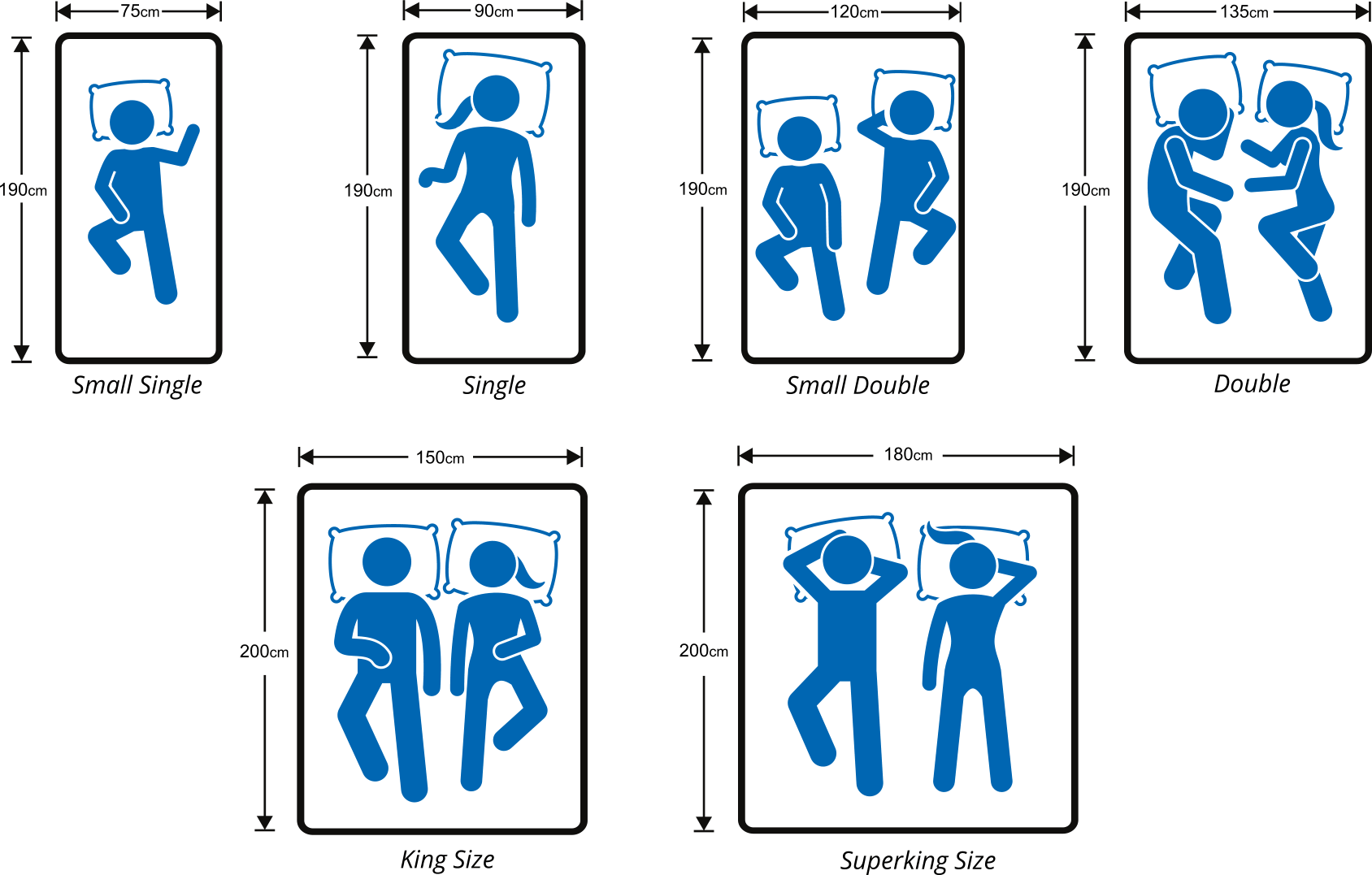 The majority of British couples still sleep in a standard double size bed which is only 135cm (4ft 6”) wide. This provides each user with just 67.5cm or about 2ft 3” of space each which is less than we give a baby in a cot! It’s certainly very cosy for two people and with so little room to move, you’re more likely to disturb your partner every time you change position, resulting in a poor night’s sleep. However, some couples prefer to sleep in close proximity to each other, claiming that it improves intimacy compared to sleeping in a much bigger bed where you literally have to go searching for your partner!

Although the illustration above shows two people sharing a small double (120cm or 4ft wide) bed, we would only suggest this size as an occasional bed for two people. This size would be more suitable for a single user, especially with UK studies showing that we’re getting bigger and heavier due to our diet and sedentary lifestyles!

So with partner disturbance a major cause of poor sleep, buying a bigger bed should result in a better night’s sleep. When trying out a bed for size, lie next to your partner on your backs and put your hands behind your head with your elbows sticking out. If your elbows don’t touch your partners’ then you have enough space to sleep comfortably.

The number of couples sleeping in separate beds is on the increase. In the Sleep Council’s Great British Bedtime Report from 2017, 12% said they slept apart compared to only 8% in 2013. Nearly a quarter of couples also reported sleeping apart at least some of the time. If you’re one of those who prefer to sleep in your own bed but still wish to be in the same room as your partner, the most popular option is the standard single bed which measures 90cm or 3ft wide, giving you plenty of room to get comfortable.

If you have a large bedroom, you could consider buying two single beds or even opt for a zip and link set where the two beds can be joined together to form a super king size. Having said that, many modern houses tend to have smaller bedrooms as the demand for 4 or 5 bedroomed properties results in a squeeze on room sizes upstairs. So, for many couples, a super king size bed is out of the question.

Here are just ten reasons why a bigger bed is better:

Keep up to date with all the latest offers and news

All of our contact numbers are directly linked to our showroom locations.